When it comes to straightening your teeth, there are more options on the market now than ever. Two of the most popular options are Invisalign® and traditional braces. While neither is definitively better than the other, both have their own set of pros and cons.

Invisalign and traditional braces are available at Aces Braces in Brooklyn and the surrounding area. We can help provide you with the best treatment for your unique case. Call us today at (718) 709-3903 to schedule an appointment or learn more about our services.

Differences Between Invisalign and Traditional Braces

When considering Invisalign and traditional braces, patients should first realize that no one treatment is better than the other. The right treatment will vary on a case-by-case basis. The first step to determining what is best for a patient is an accurate diagnosis. An orthodontist will also consider the patient’s treatment process goals, lifestyle needs, and more.

“When considering Invisalign and traditional braces, patients should first realize that no one treatment is better than the other.”

Though overall treatment time with Invisalign depends on the severity of the condition, most patients complete treatment within 10 to 24 months. However, patients with more misaligned bites or crooked teeth will likely need to wear their aligners for a more extended period. Some may also require further, smaller refinements for a few months after completing treatment. On the other hand, adults who had braces as children may complete treatment in around 10 weeks.

Similarly, treatment time with traditional braces will depend on various factors. These include the severity of the patient’s case, the amount of room inside their mouth, and how far their teeth must travel. It is also essential to consider how healthy the patient’s teeth, gums, and supporting bones are. On average, however, braces will typically remain in place for one to three years. In both cases, patients may extend their treatment time by not following instructions closely.

“…patients may extend their treatment time by not following instructions closely.”

According to at least one meta-analysis, patients prefer clear aligners like Invisalign over metal braces for their discreet nature, comfort, and ease of maintaining oral hygiene. Multiple studies in the meta-analysis also found that patients tended to have a shorter treatment time with Invisalign than with traditional braces.

However, it is crucial to note that Invisalign lacks the precision of traditional braces, making them better suited for patients with less severe orthodontic issues. While clear aligners are an effective means of addressing malocclusion, traditional braces can more significantly shift the teeth and jaw. At Aces Braces, we take all the necessary steps to provide our patients with the most effective, personalized treatment possible.

“While clear aligners are an overall effective means of addressing malocclusion, traditional braces can more significantly shift the teeth and jaw.”

As stated by Healthline, patients should keep their Invisalign trays in their mouth for 20 to 22 hours per day. These trays should only be removed for eating, drinking anything that is not clear water, or performing their oral hygiene routines. Since Invisalign trays do not involve wires or brackets, the treatment does not necessitate any dietary changes. However, patients should still brush their teeth before putting their aligners back on to prevent staining.

On the other hand, patients will need to adjust their diets while wearing braces. This is because the brackets are sensitive to damage, and patients must take care not to cause them to separate from the tooth. Thus, it is necessary to avoid any foods that are too hard, sticky, or chewy, such as popcorn, chewing gum, hard crackers, and more. It is also essential to limit sugary foods and drinks, as the combination of sugar and saliva may lead to an excess of plaque that is hard to remove.

“Since Invisalign trays do not involve any wires or brackets, the treatment itself does not necessitate any dietary changes.”

For many patients, one of the major selling points of Invisalign is its virtually invisible nature. Unlike traditional braces, they do not draw any attention to the teeth — making them appealing to teens, especially for senior pictures. Invisalign trays are also removable, which can come in handy for contact sports.

While Invisalign is a more discreet option to traditional braces, traditional braces can shift the teeth and jaw more precisely. On the other hand, Invisalign allows for less demineralization and root resorption than traditional braces — making patients less prone to discoloring or shortening. In any case, all orthodontic devices have the potential to close any wide gaps between the teeth, straighten crooked teeth, and align the tips of the teeth.

“…all orthodontic devices have the potential to close any wide gaps between the teeth, straighten crooked teeth, and align the teeth tips.”

Questions Answered on This Page

Q. What are the differences between Invisalign and traditional braces?

Q. How long is treatment time with traditional braces and Invisalign?

Q. How effective are Invisalign and traditional braces?

Q. What can I eat when I have braces?

Q. What are the aesthetic differences between Invisalign and traditional braces?

Q. What is another orthodontic option other than braces?

Q. Is Invisalign backed by research?

Q. How do I properly clean my aligners?

Q. What is Invisalign made of?

A. Invisalign trays are composed of a patented thermoplastic material called SmartTrack®. They are BPA-, BPS-, latex-, and gluten-free. They have also been FDA-approved for safe use.

Q. How often will my Invisalign trays need to be changed?

A. It depends on your specific case. However, most patients require a change every one or two weeks. Aces Braces can help you get a better idea of what to expect during a one-on-one consultation.

Q. What are traditional braces composed of?

A. Traditional braces are composed of brackets, bands, archwires, spacers, ties, buccal tubes, and ligatures. The brackets hold the archwires that move the teeth, while the bands wrap around the tooth to anchor the brackets. Aces Braces will also fit spacers between your teeth to make room for the bands.

Q. How often will I need to get my braces tightened?

A. The answer varies on a case-by-case basis. However, most patients need to get their braces tightened every six weeks. Speaking to Aces Braces may give you a better idea of what to expect.

Q. Do I still need to visit my dentist while wearing braces?

A. Yes. It is important to be especially diligent about your oral hygiene while completing orthodontic treatment, as such routines become harder to maintain with traditional braces.

By visiting us as soon as possible, our team can help get you the professional treatment you need. Instead of waiting around and allowing the symptoms to get worse, we can provide you with treatment options.


Let Us Help – Click for Directions to Aces Braces 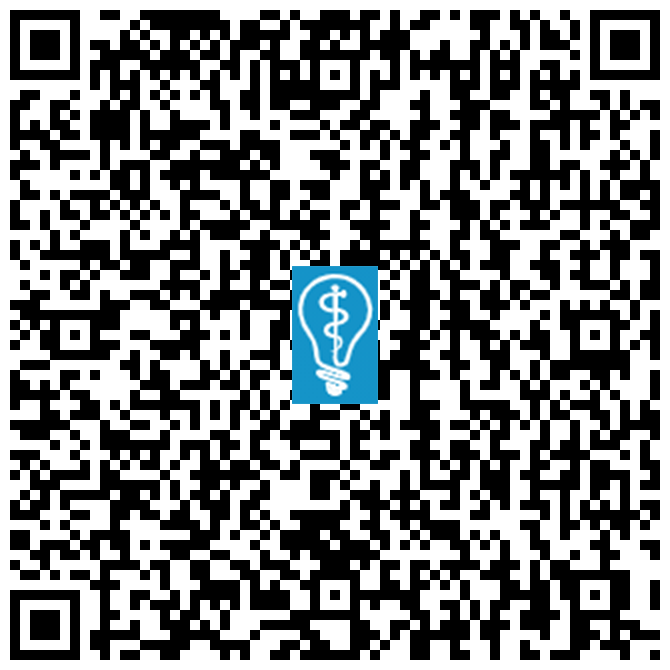 Scan here to view this page, Invisalign vs. Traditional Braces, on mobile 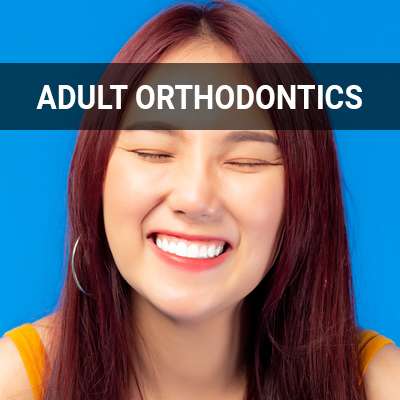 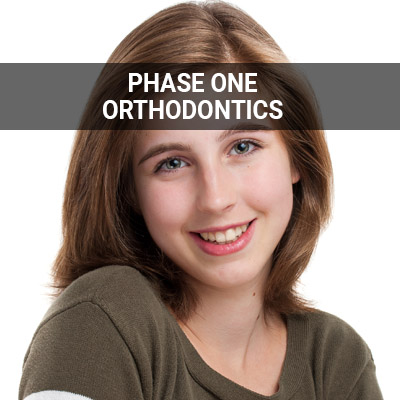 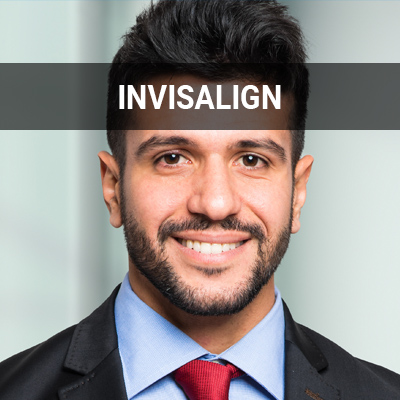 Aesthetics
The appearance of things.
Brackets
Small modules attached to each tooth when wearing braces.
Dentist
A doctor who specializes in diagnosing, treating, and preventing oral conditions.
Dietary Changes
Changes to what a patient eats.
Invisalign
A brand of clear aligners that uses sets of aligner trays to straighten the teeth.
Traditional Braces
A type of metal braces with brackets attached to the front surface of the teeth and wires threaded through each bracket.
Malocclusion
An improper alignment of the upper and lower teeth.
Orthodontics
A dental specialty dealing in diagnosing and correcting malocclusions and misaligned bite patterns.
Plaque
A sticky, bacteria-containing film that coats the teeth.
SmartTrack
The medical-grade, multilayer polyurethane plastic that makes up Invisalign aligners.

A beautiful smile is not just a matter of aesthetics — it can also greatly impact your oral health. Whether you need Invisalign or traditional braces, Aces Braces can help. Call us today at 718-709-3903 to schedule an appointment or learn more about our services.

Scan here to open directions to Aces Braces on mobile

Back to top of Invisalign vs. Traditional Braces

What Cosmetic Orthodontics Can Do For Your Smile

Cosmetic orthodontics works to improve the function and appearance of misaligned teeth. This type of oral treatment helps to even out bite pressure across all teeth, which safeguards the long-term health of gums, teeth, and jaws. Braces and aligners are used in cosmetic orthodontics to correct a crooked smile or misaligned bite. There are various types… 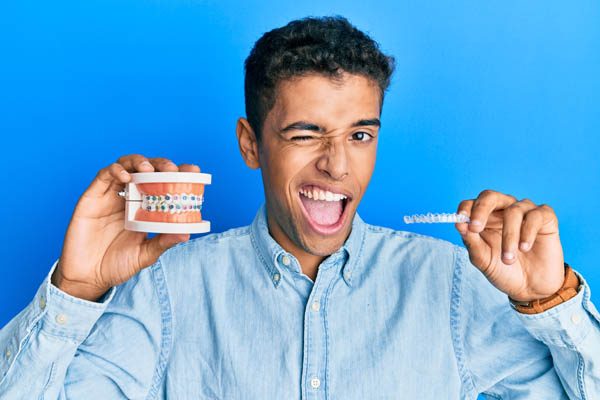 Orthodontics Can Help Self Esteem And Confidence

Invisalign® and traditional braces are two of the most common treatments that are used in orthodontics. General dentists offer both in an effort to boost individuals' self-esteem and confidence, in addition to improving oral health. Continue reading to find out more. Below is a quick overview of how orthodontics can be used to improve one's self-esteem… 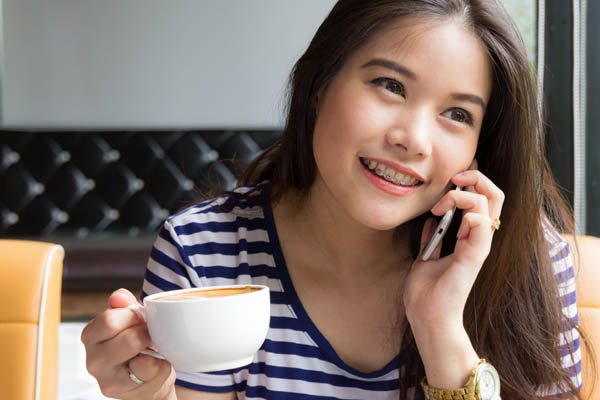 The main reason you should commit to adult orthodontics is to maintain a healthy mouth. Having teeth that are crowded or covering each other up can make it much harder to clean around, resulting in more tooth decay and room for cavities. You are committing to maintaining healthy oral hygiene, which is a great accomplishment… 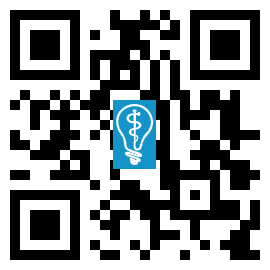